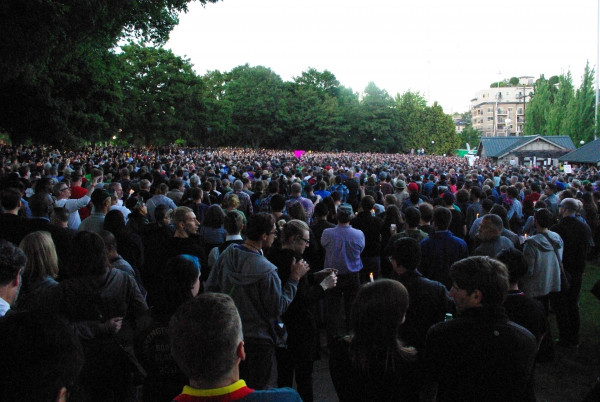 Today is the 5th anniversary of the Pulse nightclub shooting. 49 people were murdered. The most deaths of any mass shooting by 1 gunman ever in the US. (until surpassed by the Vegas shooting 1 year later).

5 years ago today waking up to the news. That morning my organization Gender Justice League was asked by the city to put together a memorial event and so we got to work. I drove all over Seattle gathering materials, coordinating, making calls, doing my part to put together the event. Keeping busy helped distract me away from the grief.

It wasn’t till that night when we got the whole event together, watched all the people gathered with lit candles as the sun went down, that I got to pause and take in what has happened. People had died. 49 people, at the Pulse nightclub. All of them were community members and family.

I went to work the next day. Probably wasn’t a great idea but I did so. I spent all day at my desk reading the stories of what happened, the eye witness accounts, last texts to loved ones and everyone still coming to terms of the incident. I remember some non-LGBTQIA people commenting, why we were all so upset about it, and it isn’t like it happened to us. But what they don’t understand was that it did happen to us.
LGBTQIA people go to nightclubs a lot. As we have been so persecuted in the past, a lot of our culture is tied deeply into the night life, and to many of us, the gay bar is a center place of community. So many of us go out there to be surrounded by community. I think that is one of the reasons why it hit so hard.
And it didn’t have to be that night. It didn’t have to be that club. It didn’t have to be those people who were there that got shot and died. There was no reason why it was them who died and not us. It was just random luck that those people were there at that club at that night and not us.
So yea, while we may have not been the ones who have been shot, but it did happened to us.

And now, 5 years later, we have lived through Donald Trump’s administration. We have been fighting constantly. We have been at protests after protests. And nothing has really changed. There is a huge avalanche of anti-transgender bills that are being pushed across the various different states, we are still struggling to get the equality act passed, and there has been no progress on gun laws. So many promises for change by politicians.

As the event came to a close, people started to trickle out of the park. As they left, one by one they put down their candles and flowers at the entrance to the park to make a makeshift memorial. Looking at the faces of everyone who have been crying, hugging their loved ones tightly, grieving and processing, I hoped that we would be able to at least use this to push for some change. Any change.

And now, 5 years later, despite all of our efforts, we are still living in the same world. 5 years, and nothing has changed.